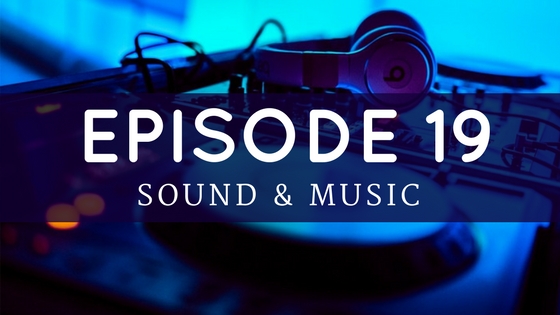 We get technical this week as we examine the ways that sound, music, and silence are used in various forms of visual media. Our guest for the episode is Dan Karlin, of SOOL Radio fame, who joins our discussion as we get into, amongst the other things, diegetic music, creating tone with sound, and how Martha gets anxious when a movie doesn’t have any score at all. It’s no accident that we’re talking about yet another Ryan Murphy joint, or that all of our media happens to be surreal in nature – truly, sound is the thread that weaves a visual story together.

If we had recorded a mere hour earlier, Martha could have impressed everyone with some super awesome podcast she was listening to on her commute home – instead, you get to hear her try and describe the ridiculously addictive (and just pretty ridiculous) mobile dress-up game, “Love Nikki.” Dan and Pete both share their recent musical adventures, which are on very opposite ends of the sound spectrum while also both managing to be completely rad.

We have fun getting both more technical and more interpretive than ever before, as we struggle to decipher the aural stylings of a David Lynch film (spoiler alert: not even Lynch knew exactly what he was talking about), a cult cyberpunk classic, and a moment of gothic absurdity. Some things we discuss: how music can be used to underscore or indicate tone, utilizing silence and the absence of music (not always the same thing!) as a cinematic device, and how to bring aural literacy (in addition to visual literacy) into the classroom as a teaching tool.

The quote on David Lynch’s relationship to sound design is taken from an interview with John Neff, and can be found here.

On November 8, we will be joined by none other than Pete’s brother Mark to discuss Masks. Here’s your homework:

And remember, if you have questions, comments, or ideas for a show, give us a shoutout here or send us an e-mail to show@homeworkpodcast.com. We’d love to hear from you!

Author: Did You Do Your Homework?

The home on the web for Did You Do Your Homework? The pop culture podcast that teaches you everything about anything using media tools. Catch our bi-weekly episodes and read our comprehensive syllabi, and don't forget to do your homework! View All Posts